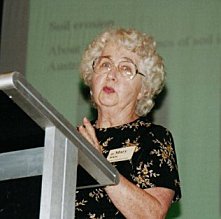 Mary White grew up in Southern Rhodesia (what is now Zimbabwe) and attended the University of Cape Town where the subject of her Masters Degree thesis in Botany was Palaeobotanical. It was supervised by Professor Alex du Toit, a ‘father’ of Continental Drift, and from this chance association a lifetime’s interest in Gondwana and its environments and biota has evolved. After University, an interest in systematic botany in Africa, travelling and living in the wilds with their geologist husband and young children, provided more background to understanding southern floras.

The White family came to Australia in 1955 and from 1956 until the 1980s Mary White was a consultant to the Bureau of Mineral Resources in Canberra, reporting on field collections of plant fossils and producing 55 BMR Records. She also worked part-time as a consultant to mining companies, while raising five children. As a Research Associate of the Australian Museum in Sydney since 1975 she has curated at the plant fossil collections, establishing a fully documented research collection of 12,000 specimens and writing scientific papers on her discoveries in the collection. This work showed her that there was no book which presented the big, interdisciplinary, picture of the evolution of a continent and its flora through time, and inspired The Greening of Gondwana. (First published in 1986 by Reed Books; Third Edition, published by Kangaroo Press/Simon & Schuster, in June 1998)

Since 1984, Mary White has been a full-time writer and lecturer, presenting her interests in the prehistoric world and the evolution of the Australian continent and its biota to the enjoyment of everyone interested.

The Nature of Hidden Worlds and Time in Our Hands, on the fossil record and semi-precious gemstones, (and four children’s books) followed The Greening of Gondwana. An account of how Australia became the driest vegetated continent, After the Greening, The Browning of Australia was published by Kangaroo press in 1994 and won the Eureka Prize. (The Nature of Hidden Worlds has been released as Reading the Rocks — Kangaroo press 1999 and Time in Our Hands is to be re-released in 2001) Listen … Our Land is Crying, on the Australian environment, its problems and solutions, followed in September 1997. Its companion volume Running Down – Water in a Changing Land — was launched on the 23rd of October 2000 by Dr Graham Harris, Chief of CSIRO Land and Water. It covers palaeodrainages; ancient river systems; what our rivers were like at the time of European settlement, and how they are today, groundwater and all aspects of Australia’s most precious resource. Listen and Running Down explain how the geological history of the continent pre-determined many of the problems that European-style land and water use have caused.

The Greening of Gondwana, After the Greening, Listen and Running Down form a four part saga, a background to understanding why much of our current land and water use is unsustainable. Another book — on the Biosphere; bacterial origins for life; symbiosis; the microbiology of soils; and how Australian ecosystems function — is in preparation.

Macquarie University granted Mary White a Doctor of Science degree in recognition of her contributions to science through her books in 1995. The Queensland University of Technology granted her the degree of Doctor of the University on the 20th September 1999. She received the Riversleigh medal ‘for excellence in promoting understanding of Australian prehistory’ in December 1999. Running Down was short-listed for the Eureka Prize in 2001.