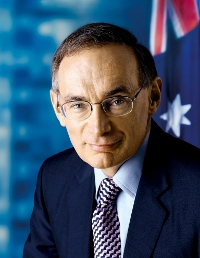 “What do you do when we reach 30 million, 50 million?  Are you telling us, Canberra are you telling us, that there’s no other economic model but to jam bigger and bigger numbers, especially into our three biggest cities and to ignore all the advice about the fragility of rainfall patterns in Australia and all the advice about our soils and to say the one economic model is to pump up population increase?”  – Quote from the ‘Meet Our Patrons’  video series here

As New South Wales’ longest serving (consecutive terms) Premier, the Honourable (Bob) Robert Carr brings a whole-of-government perspective to the population policy debate.  His concern for the environment is renowned, with nature conservation a personal priority during his tenure as Premier (1995-2005). Bob began highlighting the key importance of a sustainable population policy during the mid-1990s and continues to vigorously do so.  His advocacy for education and the environment set a precedent followed by other ALP leaders around the nation.

Prominent environmental achievements during his decade as Premier include:

• More than doubling the number of National Parks in NSW – an increase from four million hectares to over 6.6 million hectares
• A three-fold increase in wilderness protection – from 650,000 to nearly two million hectares
• The North Side Sewage Tunnel which saw dramatic improvements to Sydney Harbour water quality
• The 2003 introduction of the NSW Greenhouse Gas Reduction Scheme, the world’s first carbon trading scheme.
• The building sustainability index (BASIX) which mandated reductions in energy and water use of up to 40 percent in every new dwelling built after July 2004.

Since 2005 Bob has remained active in policy debates.  In 2012-13, at then Prime Minister Julia Gillard’s invitation, he filled a casual vacancy in the Senate, succeeded Kevin Rudd as Minister for Foreign Affairs, and was a member of the national parliament when the national carbon trading scheme, the Carbon Pollution Reduction Scheme, came into effect on 1 July 2012.  Bob accepted SPA’s invitation to become a Patron during his term as Foreign Minister.

Features of his work in recent years include:

• Director – Australia-China Relations Institute, University of Technology Sydney (2014-19).  Bob was also a UTS Professor of International Relations during this time.
• Authoring two memoirs – Diary of a Foreign Minister (NewSouth Publishing 2014) and Run For Your Life (MUP 2018).
• Industry Professor (Business and Climate Change) and Deputy Vice-Chancellor (Research) – working with both the Institute for Sustainable Futures and the UTS School of Business at the University of Technology Sydney (UTS) (Now retired).

Examples of Bob’s recent thoughts and writings on population and other issues can be found at:

SPA recently interviewed our patrons for our short video series ‘Meet Our Patrons.’  Bob Carr’s interview can be seen on our YouTube channel here