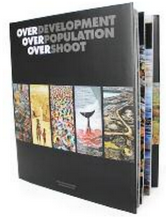 “This is a magnificent book, albeit confronting at times. SPA is extremely fortunate to have been given a number of books to sell and distribute in Australia.”

The day I re-read Overdevelopment, Overpopulation, Overshoot (OVER), a paper was published in the journal Science saying humanity had exceeded four of nine planetary boundaries. OVER is a large-format book which, through highly compelling photographs and excellent text, depicts the way human numbers and behaviour have damaged the very biosphere on which we so critically depend. It complemented the Sciencepaper completely.

OVER is not for the faint-hearted. Some photos are not so much compelling as repelling. The one of 17 men carrying a massive silverback mountain gorilla tied to a platform is enough to make you weep. The photo of at least 30 severed gorilla feet makes you retch, as does the ship deck covered in shark fins. The one of a huge pile of ivory tusks made me turn away in horror, as did the one of the dead polar bear. And we are all familiar with the horrific photo of the collapsing, emaciated African toddler with the vulture waiting in the wings.

Some photos deserve a prize from a purely artistic perspective, like the bag of rice being thrown from a truck to numerous outstretched arms. Some are sheer joy, like the one of dolphins leaping through waves. Others make you laugh, albeit in semi-horror, such as the one of swimmers, all in plastic tyres, absolutely wall-to-wall, or rather, tyre-to-tyre.

Accompanying the first photo in each of the sections is a short introduction such as that for Climate Chaos which says: ‘Climate change may be the purest expression of humanity’s toxic effect on the biosphere’. Or in Elbow to Elbow, we read: ‘Time and space – time to be alone, space to move about – they may well become the great scarcities of tomorrow’.

All other photos have a quote, for instance, in the section Trashing the Planet, there is one from Jacques-Yves Cousteau: ‘Water and air, the two essential fluids on which all life depends, have become global garbage cans’. The photo of a surfer coming through a curling wave filled with garbage only too well illustrates Cousteau’s point.

Another quote, this one from Material World, is from David Suzuki. ‘There are some things in the world we can’t change – gravity, entropy, the speed of light and our biological nature that requires clean air, clean water, clean soil, clean energy and biodiversity for our health and well-being. Protecting the biosphere should be our highest priority or else we sicken and die. Other things, like capitalism, free enterprise, the economy, currency, the market, are not forces of nature, we invented them. They are not immutable and we can change them. It makes no sense to elevate economics above the biosphere.’

With such a wealth of visual detail, it would be easy to overlook the major text. William (Bill) Ryerson of Population Media Center, well known to us in SPA, provides an excellent introduction. He asks the crucial question: ‘How many people can the Earth sustain, at a reasonable standard of living, while leaving room for diversity of life to flourish?’ He concludes: ‘We are already doing severe and irreparable harm to the planet. Something has to give.’ Ryerson writes that given population dynamics is central to determining the welfare of future generations, what the world needs is a wake-up call. ‘This book is that wake-up call.’

At the other end of the book in the afterword, called Choosing a Planet of Life, deep ecologist and philosopher Eileen Crist, co-editor of the brilliant book of essays on population Life on the Brink (2012), addresses the devastating effect that food production has already had on the planet and contemplates the prospect of having to feed even more billions of people. She notes that agriculture is already responsible for more than 30 per cent of greenhouse gas emissions, consumes 70 per cent of available freshwater, and causes not only erosion and desertification, but also nutrient run-off, leading to eutrophication in lakes and seas.

Crist writes: ‘From a deep ecological perspective … the unprecedented ecological impact demanded for the production of so much food has demonstrated our capacity to take a magnificent planet – second to none in the known universe – and turn it into, or use it as, a human feedlot, and then muster the arrogance to call this act of pilfering and degradation, an achievement.’ This is a magnificent book, albeit confronting at times. SPA is extremely fortunate to have been given a number of books to sell and distribute in Australia.

This is a magnificent book, albeit confronting at times. SPA is extremely fortunate to have been given a number of books to sell and distribute in Australia.