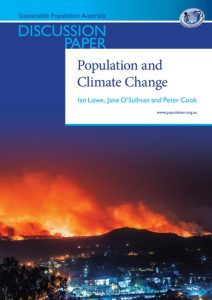 Climate change is one of the greatest self-inflicted threats that human civilisation has ever faced. An unprecedented global effort is under way to change course to avert catastrophic outcomes – but doubts remain whether enough is being done, and quickly enough.  In the flurry of activity and proposals, the role of human population size and growth is virtually ignored or actively rejected. This paper fills this gap with an in-depth review of the evidence. It explores questions such as:

This paper includes unique insights by lead author Ian Lowe, who has been deeply involved in climate policy and research in Australia from its very beginning in the 1980s.