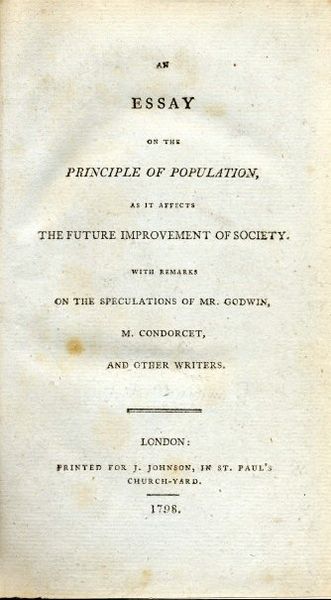 This description is from the Wikipedia article on An Essay on the Principle of Population http://en.wikipedia.org/wiki/An_Essay_on_the_Principle_of_Population.

The book An Essay on the Principle of Population was first published anonymously in 1798 through J. Johnson (London). The author was soon identified as The Reverend Thomas Robert Malthus. While it was not the first book on population, it has been acknowledged as the most influential work of its era. Its 6th Edition was independently cited as a key influence by both Charles Darwin and Alfred Russel Wallace in developing the theory of natural selection.

A key portion of the book was dedicated to what is now known as Malthus’ Iron Law of Population – this name itself is retrospective, based on the iron law of wages, which is the reformulation of Malthus’ position by Ferdinand Lassalle, who in turn derived the name from Goethe’s “great, eternal iron laws” in Das Göttliche. This theory suggested that growing population rates would contribute to a rising supply of labour that would inevitably lower wages. In essence, Malthus feared that continued population growth would lend itself to poverty.

One immediate impact of Malthus’s book was that it fueled the debate about the size of the population in Britain and led to (or at least greatly accelerated) the passing of the Census Act 1800. This Act enabled the holding of a national census in England, Wales and Scotland, starting in 1801 and continuing every ten years to the present.