Pronatalism and Overpopulation: Challenging the Social Pressures to Procreate

World Population Balance – SPA’s colleagues in North America –  will be hosting a panel even in anticipation for World Population Day 2021.   This online event will be hosted live late in the evening on July the 07th in Australian time,  however for the night-owls among us, please consider going if you can or otherwise recommend to any families and friends living in North America.

More information and reservation for this free online event can be found on Eventbrite here.  We also provide further description, courtesy of World Population Balance,  below: 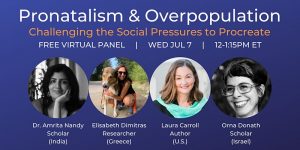 Pronatalism and Overpopulation | Challenging The Social Pressures to Procreate

The decision to have children or not is arguably one of the most important decisions we make in our lives. It is largely regarded as an isolated personal decision and a natural right of passage into adulthood. But how personal really is our decision to have a child?

Human population has doubled in the last 50 years, growing from approximately four billion in 1970 to almost eight billion currently. This is no surprise given that we are adding about one million new humans every five days. There is rising public awareness that overpopulation and rampant overconsumption are driving climate change, resource scarcity, and biodiversity loss here and abroad, yet it is a challenging issue to discuss.

With China’s three-child policy, the U.S. political fervor on the “birth-dearth”, Iran’s blockage of contraception and vasectomies and Greece’s baby bonuses to boost births in the name of religion and tradition, it is hard to miss the the pervasive and oppressive pressures of pronatalism in culture. However, pronatalism is not limited to economy-driven politics, businesses, or places of worship; it is alive and well in our homes, families, media, and our culture. Pronatalism is the social bias towards having children and because of its importance to human survival as a species it operates via a wide variety of mechanisms, ranging from the subtle to the overt, and from “freely-chosen” to the coercive. Its measures are a cheap way of ensuring that people have children – whether they want them or not, whether it is safe to bring a child into this world or not, and whether it comes at the expense of our own well-being and that of our children, other humans, animals, and our planet, and ultimately the survival of our own species, or not.

On this panel, we will explore the concept and roots of pronatalism, its intimate connection with overpopulation, and its impacts on our identity, on other humans, animals, and the environment.

Registration for this virtual event is FREE and required to attend. All registrants will receive a link to attend the event via email approximately 24 hours prior to the event.

Laura is an internationally recognized expert on the childfree choice. She is the author of The Baby Matrix: Why Freeing Our Minds from Outmoded Thinking about Parenthood & Reproduction Will Create a Better World, a book on the societal impacts of pronatalism and the importance of moving to a post-pronatalist world. Her books also include: Man Swarm: How Overpopulation is Killing the Wild World (Co-author), Voluntary and Involuntary Childlessness: The Joys of Otherhood? (Contributor), and Families of Two: Interviews with Happily Married Couples without Children by Choice. Laura has been featured on major television and radio media, including ABC’s Good Morning America, NPR and Canadian CBC public radio. She and her work have been in a wide range of print/digital media, including Women’s Health (UK & South Africa), Fortune, The Wall Street Journal and New York Magazine.

Elisabeth holds a BSc on Mathematics and an MSc on Biodiversity Conservation but she decided to work on neither of these domains due to the fact that they are both human centered. For the last three years she has been working as a freelance researcher for international anti-speciesist NGOs. Being a passionate environmental, wild & stray animal protection activist from her childhood, she set up in 2017 an educational online platform called Ethos & Empathy, through which she tries to raise awareness on issues related to non-human and human animal rights, as well as to ecology. Currently, the focus of her advocacy is on promoting a vegan, child free and flight free lifestyle as these are the three main ways to live a life with a low carbon footprint. Recently she shared her views on that matter, in the 1st episode of a relevant mini documentary series by the Guardian, called The Baby Bust.

Orna is an Israeli sociologist, lecturer, writer and feminist activist. She teaches at Tel Aviv University, Ben Gurion University, and the Academic College of Tel Aviv-Yafo. Orna has studied and teaches the fields of non-motherhood, motherhood, and time and emotions from sociological and feminist perspectives. She is a social activist and the writer of the book “Regretting Motherhood” which was translated into 14 languages, in which she discusses the pressures placed on women, whose choices are seen as a threat to the status quo. She wishes to undermine the socially-accepted idea that being a woman inherently includes motherhood, and claims that pushing women in motherhood can cause them great suffering. In addition to her academic research, she has served as the chairwoman of the governing board of one of the rape crisis centers in Israel. She is still volunteering in the center, since 2004.

Amrita is a New Delhi-based researcher and writer whose work on gender, rights and culture has been published in national and international books, journals and newspapers. Her doctoral research on women’s choices vis-à-vis motherhood and mothering won her the Fox Fellowship at Yale University (2013-2014) and is the subject of her book Motherhood and Choice. Uncommon Mothers, Childfree Women (Zubaan and New Text, 2017). Winner of the 2015 Laadli National Media and Advertising Award for Gender Sensitivity, Amrita has a Ph.D from Jawaharlal Nehru University, New Delhi, and a Master’s from the University of Oxford, U.K. Currently, she works with human rights and feminist organizations and looks after her elderly parents and plants, while trying to fuse it all with the contemplative-spiritual.

Nandita is the Executive Director at World Population Balance and brings over 15 years of experience in engineering, education, environmental and animal advocacy, and non-profit management to WPB. A Humane Educator and a passionate advocate for planetary health, Nandita’s area of interest is on the intimate links between pronatalism, anthropocentrism and overpopulation and their impacts on human rights, animal protection, and environmental preservation. She has a B.Eng. (Aerospace Engineering) from Ryerson University and a B.Ed. from University of Toronto. Nandita is completing her M.Ed. in Humane Education from Antioch University. Nandita will be joining Antioch University in 2022 as an instructor where she will teach a graduate course on ‘Pronatalism and Overpopulation’. She also serves as a Board member for the Canadian Society for Humane Science.