Sustainable Population Australia (SPA) are partnering with filmmaker Maxine Trump on the Australian premiere of her award winning film To Kid or Not to Kid in Melbourne and Perth on the 26 and 27 February.

Hailed by critics as a ‘thoughtful and insightful film’ (The Scotsman) and ‘Candid and empathetic’ (the New York Times), the documentary is being screened as part of SPA’s ‘Stop at Two’ campaign. This will be the first time the film will be screened in theatres before being released on Amazon Prime on February 27th. 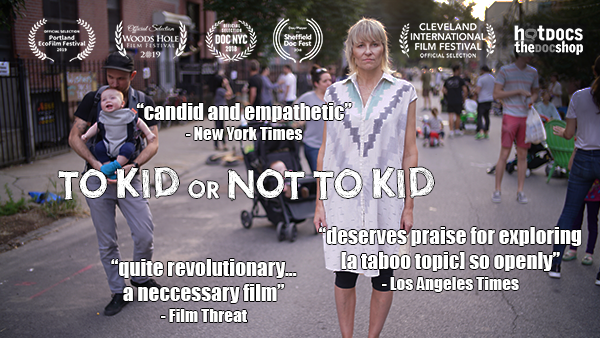 SPA National President, Sandra Kanck, says the aim of the campaign is to normalise the choice of having small or childfree families.

“The choice whether or not to have children is one of the biggest decisions any individual or couple will make in their lifetime,” says Ms Kanck.

“This decision is often swayed by family and social factors that have traditionally encouraged larger families.  It is clear, however, that overpopulation is playing a very significant role in humans’ unsustainable impact on the planet, including climate change and these matters are now bearing on the decisions made by many to have smaller families or no family at all.

“As an environmental NGO, we advocate for smaller families as one solution towards reducing pressures on the Earth and support those who go down that path,” says Ms Kanck.

“We applaud director Maxine Trump for turning the camera onto her personal life to bravely dive into the taboo and stigmatised topic of child-free living and to explore the reasons behind this choice,” she says.

“As Director Trump has herself declared ‘’’Why can’t we talk about not having kids?’ We think it’s about time we did.”

To Kid or Not to Kid has enjoyed critical acclaim in the USA, with praise from The New York Times and The Los Angeles Times.

Ms Kanck also advised that this month will see the launch of ‘Childfree Magazine’, founded by Brisbane based Tanya Williams, author of ‘A Childfree Happily Ever After.’

“The launch of this new magazine is another timely contribution towards a less judgemental world where it’s OK not to have children,” says Ms Kanck. 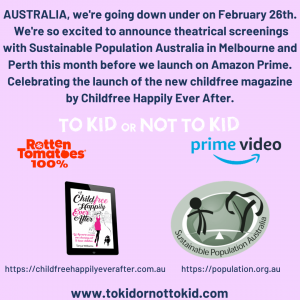 “To Kid or Not to Kid” will be screened in Melbourne on February 26, 08:30 pm at Cinema Nova, bookings here.  It will be screened in Perth on February 27, 06:45pm at Bassendean Community Centre in cooperation with Transition Town Guilford, more information here.  The Melbourne screening will also include the short film ‘Talking Heads: Choosing to Have Children….or Not’ made in house by SPA.

Maxine Trump, Director of ‘To Kid or Not To Kid’ can be contacted for interview or movie review at contact@helpmanproductions.org. or at the website here

Tanya Williams, Chief Change maker at Childfree Magazine, can be contacted on tanya@childfreehappilyeverafter.com.au or at the website here