Claims that skills shortages require massive increases in the skilled migrant intake do not stand up to scrutiny, according to a new Briefing Note prepared by Leith van Onselen, Chief Economist at MacroBusiness.

The Note, commissioned by Sustainable Population Australia, comes as employer groups and some government members are angling to ramp up skilled migration to as much as 400,000 per year. 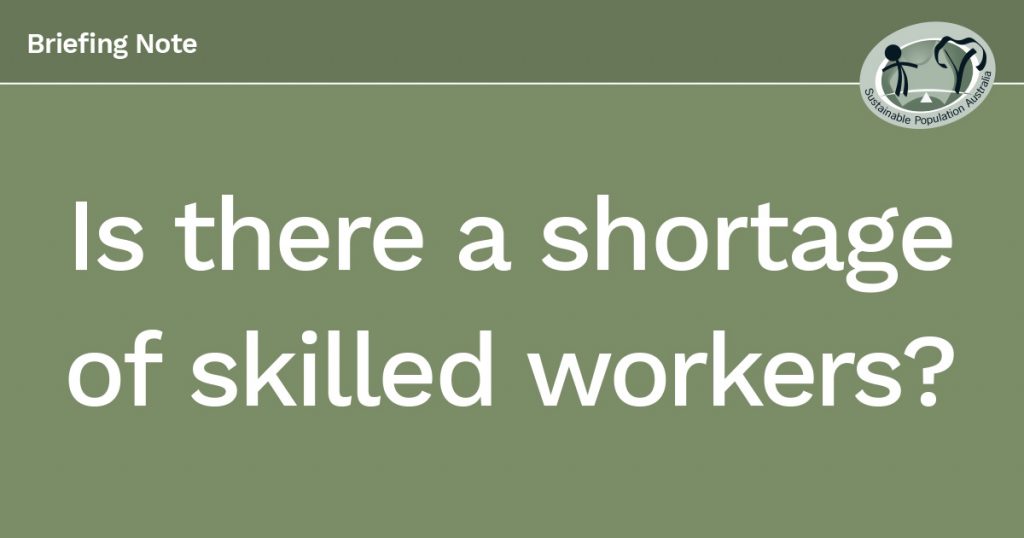 The Briefing Note finds that government data show very little evidence of skills shortages. Of the more than 670 occupations listed as eligible for a ‘skilled’ visa, there is no requirement that any of them actually have a skills shortage.

Moreover, half of the ‘skilled migrant’ intake are not actually skilled.  Primary applicants make up only around half of the skilled stream and 30% of non-humanitarian migration (including both skilled and family categories), with most of the remainder being partners and dependent children.

“Australia’s skilled migration program has been corrupted,” Mr van Onselen argues. “It was once a method for complementing the employment of Australian workers but is now being used to create competition with Australian workers and lower their wages on a massive scale.

“Immigration is being used to suppress wages and claims to the contrary from business lobbies do not withstand scrutiny,” he says. “Whereas supply shortages of everything, from petrol to food to desirable property, lead to soaring prices, no such wage growth is seen in Australia in response to claimed shortages.

“Allowing the mass importation of foreign workers circumvents the ordinary functioning of the labour market by enabling employers to source cheaper foreign workers in lieu of raising wages, as well as avoiding the need for training,” Mr van Onselen says.

“High levels of immigration in the decade pre-COVID-19 contributed to stagnant incomes growth, lower incomes and employment prospects for both skilled and unskilled Australians, and detracted from the living standards of many Australian working families.”

National President of SPA, Ms Jenny Goldie, welcomed the findings and said that the myth of ‘skills shortages’ had been pushed for decades by employer groups such as the Australian Chamber of Commerce and Industry.

“Despite decades of strong skilled migration whereby literally millions of foreign workers were imported into Australia, industry and the federal government continue to make identical claims about chronic skills shortages,” Ms Goldie says. “These claims are no longer credible.”

“Australians understand that rapid population growth has not been in their interests. It is time to rethink Big Australia,” says Ms Goldie.