The sky will not fall due to slower population growth

Treasury projections that Australia’s population growth rate in 2021 will drop to 0.6 percent from 1.6 percent due to the Covid-19 pandemic has been welcomed by Sustainable Population Australia (SPA).

The Treasurer, Josh Frydenberg, has encouraged Australians to have more babies to bolster a flagging economy.

President of SPA, Sandra Kanck, says “The cause of this dramatic drop in population growth is the reduction in immigration due to closing of borders during the Covid-19 pandemic.”

“Immigration has been contributing around 60 percent of our population growth.”

“For all Mr Frydenberg’s importuning, it must be understood that it is the rate of growth that has dropped; Australia’s population continues to grow and will for a long time to come and would do so even if we had zero net immigration.

“Our future does not lie in perpetual, unsustainable, population growth. Opinion polls repeatedly show that a majority of Australians understand this and do not want our population to grow much beyond its present size of nearly 26 million. It is time for Australian governments to heed these voices.”

“Reduced immigration will mean less pressure on housing prices and less congestion in the big cities.”

“It will slow the relentless decline in our natural environment, a direct consequence of our growing human footprint. Our threatened species will be provided a desperately needed respite from a variety of human-induced burdens that have brought them near to extinction.”

“It will provide opportunity to rescue – before it is too late – significant tracts of agricultural land from relentless urban sprawl.”

“It will mean less pressure to build sub-standard high density, high rise apartment blocks which we now know are not optimal dwellings for the age of global pandemics.”

Ms Kanck says it will mean less pressure on state and federal budgets trying to catch up with demands for infrastructure caused by high population growth – and never succeeding.

“For the past two decades, Australia has experienced one of the highest population growth rates of any developed country,” Ms Kanck says. “While a few wealthy people have benefited from this, it has come at a cost for the average Australian. It has put downward pressure on wages and put home ownership beyond the reach of many”.

“Mr Frydenberg has called on Australians to have more children to solve a problem that does not exist” said Ms Kanck. 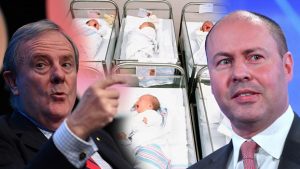