The World Scientists’ Warning of a Climate Emergency 2021 released this week says the root cause of climate change is overexploitation of the Earth, and one solution is to stabilise and gradually reduce human populations.

The report cites five other solutions including eliminating fossil fuels; slashing back short-lived pollutants such as methane and soot; protecting the Earth’s ecosystems to restore biodiversity; switching to mostly plant-based diets and change cropping practices; and moving from indefinite GDP growth to a circular economy.

“Likewise, seeing stabilisation and reduction in population numbers as a solution is also very welcome, albeit overdue,” says Ms Goldie.

“There are too many of us, consuming too much and producing too many wastes, not least carbon dioxide, the main culprit behind climate change. We have to adopt all six solutions, not just one or two.” 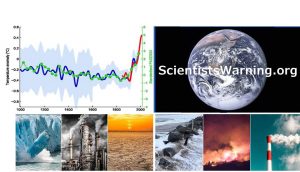 The nearly 13,000 world scientists note in this report, the second in two years: “…there has been an unprecedented surge in climate-related disasters since 2019, including devastating flooding in South America and Southeast Asia, record shattering heat waves and wildfires in Australia and the Western United States, an extraordinary Atlantic hurricane season, and devastating cyclones in Africa, South Asia, and the West Pacific.

“There is also mounting evidence that we are nearing or have already crossed tipping points associated with critical parts of the Earth system, including the West Antarctic and Greenland ice sheets, warm-water coral reefs, and the Amazon rainforest,” the scientists warn.

Ms Goldie says there is no room for complacency and the time for action is now.

“As the scientists note, we can stabilise population numbers by providing voluntary family planning and supporting education and rights for all girls and young women, which has been proven to lower fertility rates.

“SPA agrees with them that all transformative climate action should focus on social justice by prioritising basic human needs and reducing inequality,” she says.