Taking the data to powerful proponents of Big Australia is SPA at its best. On 15 November 2021, SPA Queensland President Edward Smith gave SPA’s pitch to rethink Big Australia’s unlimited population growth to Queensland Senator Amanda Stoker, following the Queensland AGM. Senator Stoker stayed on to give her defence of Big Australia and to her credit, to engage in a lively question and answer session with Queensland members that at times became a bit ‘spirited’. While Senator Stoker gave no indication of changing her position, the night was still a success as it was the start of a conversation with a rising star of the Commonwealth Government. Simon Cole, Jane O’Sullivan and Tony Matta made it all possible behind the scenes. It was great to have members from as far west as Surat and as far North as the Sunshine Coast join us in Brisbane on the night. 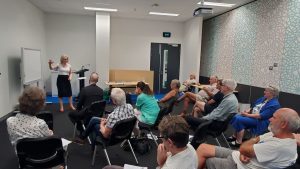