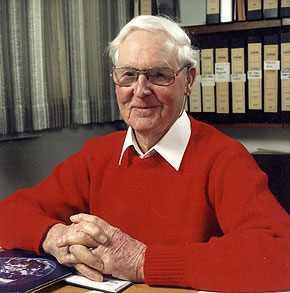 National President of SPA, Ms Sandra Kanck, said those who knew Professor Fenner described him as a "beautiful man". For many scientists in our organisation and beyond, he was the ultimate role model.

Frank Fenner was made one of five Patrons of SPA after the death of the first Patron, the poet Judith Wright, in 2000. He was committed to achieving population stabilisation which he recognised as integral to achieving environmental sustainability.

"We were privileged in SPA to have had such an eminent scientist as our Patron, winner of so many awards including the Prime Minister’s Science Prize in 2002. For someone who had helped rid the world of smallpox and developed myxomatosis for the control of rabbits, Frank was wonderfully personable and, at the same time, humble about his achievements", Ms Kanck said.

"Members of SPA who were privileged to know him are grieving at his passing, even though they had witnessed his increasing physical frailty in recent years. He was still very astute mentally, however, and attended public meetings and conferences, including those of SPA, in Canberra until very recently", she said.

Ms Kanck said Professor Fenner had expressed pessimism about the state of the world privately for many years but then much more publicly in June when he said that climate change would drive humans to extinction.

"Let’s hope he was wrong on this one, even though he was right about so much else. But whatever the future holds, the world and Australia are better places for Frank having been here", Ms Kanck said.