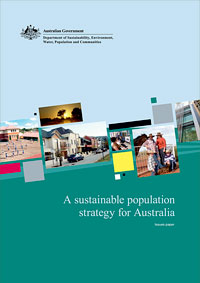 THE NATIONAL President of Sustainable Population Australia, Hon Sandra Kanck, has urged that Australia should cease growing its population as soon as possible, pending a check that the nation is living sustainably.

In SPA’s submission to the Government’s process to develop a sustainable population strategy, Ms Kanck said there was “abundant evidence” that the 22.5 million people now living in Australia were not doing so sustainably.

“We argue for cessation of population growth as soon as that can be achieved, and then we can check again to see if we are yet living sustainably,” Ms Kanck said.

“If not, we should seek to further reduce both population size and per capita environmental impact until a sustainable balance between humans and nature have been established.”

Click here to view the full text of SPA’s submission.

SPA has also recently made a submission to the Government’s Independent Review of Aid Effectivness, arguing that Australia’s overseas aid program will be much more effective if the quantum of aid devoted to family planning is increased. Click here to view the full text of the aid submission.

In January, the ACT Branch of SPA made a submission to the ACT Government’s Inquiry into the Ecological Carrying Capacity of the ACT. Click here to view a full text of this submission.