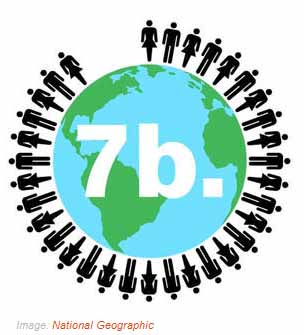 The UN Fund for Population Activities (UNFPA) has chosen 31 October as the day on which it estimates world population will reach 7 billion – just over 12 years since the Day of Six Billion, on 12 October 1999.

UNFPA is planning a series of events publicise the milestone, including a social media campaign starting on World Population Day, 11 July, and a seven-day countdown starting on 24 October.

The UN’s projections are for the population to reach 9.3 billion by 2050 and 10.1 billion by the end of the century.  UNFPA Executive Director Dr Babatunde Osotimehin said a world of 7 billion was both “a challenge and an opportunity”.

“But reducing inequities and finding ways to ensure the well-being of people alive today – as well as the generations that follow – will require new ways of thinking and unprecedented global cooperation.

“In particular the population projections underscore the urgent need to provide safe and effective family planning to the 215 million women who lack it.  “Small variations in fertility – when multiplied across countries and over time – make a world of difference. We must invest the resources to enable women and men to have the means to exercise their human right to determine the number and spacing of their children.”