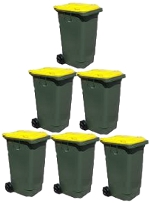 Once there was a village with 10 families who shared a 1000 litre waste bin between them. This meant they could each put in 100 litres of waste before the bin was full. The waste collection truck would come each month and swap the bin with another 1000 litre bin.

However one day the waste truck turned up and said the company would now be providing 950 litre bins so everyone would have to reduce the volume of their waste by 5 litres a month to 95 litres. This was only a 5% reduction on what they were used to so there were not too many grumbles and everyone was fairly happy.

Later on the village population increased by 2 families (20%) and they each wanted to tip their 95 litres of waste into the same bin, which of course would not fit. The waste management company said they would not supply a bigger bin and that they would all have to reduce their waste further. How much would this be?