The Australian Academy of Science gave Sustainable Population Australia (SPA) the rights to hold the Fenner Conference back in 2019. It was meant to be held in September 2020 but was deferred because of Covid to October 2021, and then deferred again. Finally, it happened in-person and on-line at the Shine Dome in Canberra on 17 and 18 March 2022. 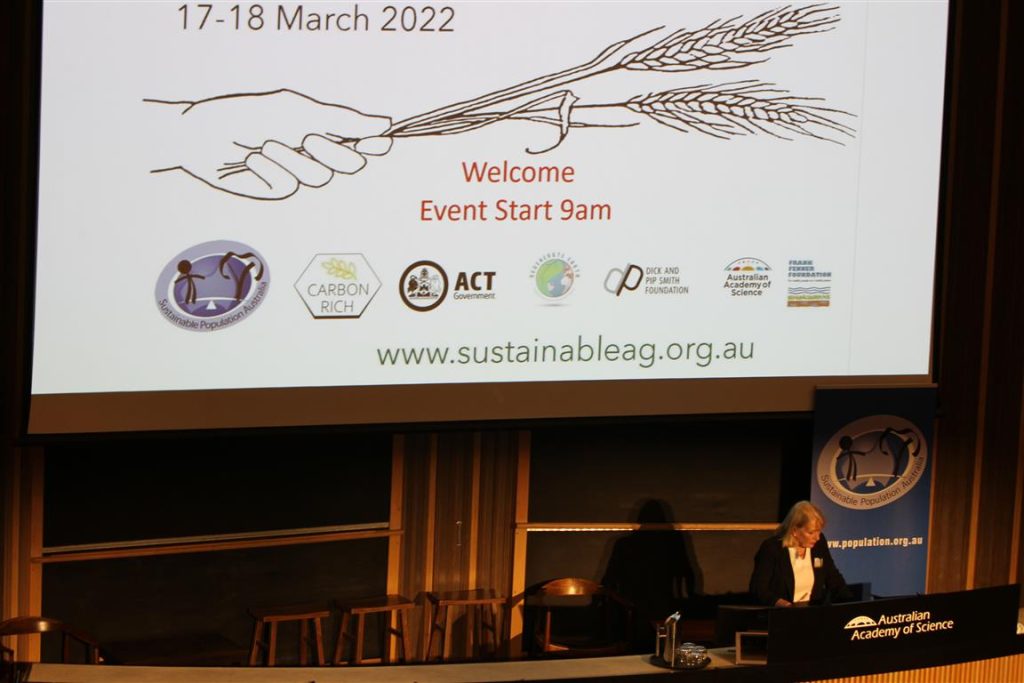 The Academy asked for two co-organisers so Regenerate Earth and the Frank Fenner Foundation came on board. It was inevitable that regenerative agriculture would be a strong theme and Dr Charles Massy, academic, regenerative farmer and author of “Call of the Reed Warbler” was chosen as keynote speaker. 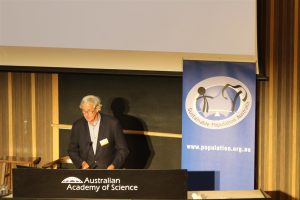 There are other aspects to sustainable farming than regenerative agriculture, however, and other speakers addressed, amongst other things, eco-agriculture, climate change impacts, agriculture as a key strategic asset, the psycho-social foundations for sustainable agriculture, the encroachment of farming land by mining, the relationship of food and war, and the critical role of population size and growth. 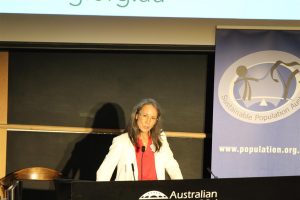 Because the shadow of Covid hung over the lead-up to the conference, it was held on-line as well as in-person. Many people chose the former because of Covid or distance, nevertheless, the Ian Wark theatre in the Shine Dome was full and there were no technological hitches in live-streaming the conference. Indeed, everything ran smoothly. The buzz of conversation in the Jaegar room where lunches and teas were served suggested there was plenty of networking going on. It is important at such conferences that attendees are able to approach the speakers, and for fellow speakers to get to know one another better professionally. 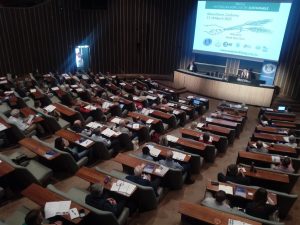 What were the main messages coming out of the conference? On the first day, Charles Massy spoke of the underground revolution that is regenerative agriculture which seeks, not just to restore the landscape functions of soil, water and biodiversity, but to eliminate certain harmful inputs and practices of industrial agriculture. National Soils Advocate Penny Wensley stressed that soils are a key national asset on which we all rely. Walter Jehne talked of the urgent need to reverse the decline in our natural capital and re-hydrate the landscape. Patrice Newell said we must incorporate Indigenous knowledge in our agricultural practices. Matthew Evans stressed modern farming needs to ‘build soil’ as a top priority. Gabrielle Chan said agriculture had to be moved towards a form that regenerated the environment, but there were pitfalls as well as potential for this. John Feehan described how dung beetles, by burying dung, can improve soil fertility by enabling plantroots to penetrate more deeply, and thus allow microbial activity to thrive. 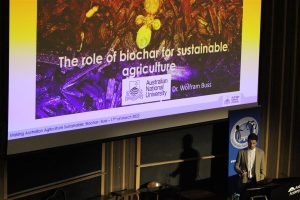 Wolfram Buss analysed what biochar can and can’t do in terms of improving water and nutrient retention in soil, reducing greenhouse gas emissions and absorbing contaminants. Guy Webb described how to restore carbon to landscape that had been degraded by tillage, vegetation clearing and overgrazing.

The second day started with four speakers on climate change and its impact on farming. Mark Howden said the recent IPCC report that record and still rising greenhouse gas levels are already affecting agricultural production, profitability and sustainability. Ian Dunlop, appearing by zoom, warned that expert scientific opinion calling for a genuine emergency response to climate change is still being ignored by our political leaders. Justin Borevitz provided new tools and technologies that link agriculture and ecosystems in an effort to counter the threats to food security from climate and land use change. Adam Carroll spoke of how selecting stress-tolerant crops in controlled glasshouse environments can be accelerated to predict performance in the field.

Afterwards on the second day, Stuart Hill spoke of the ‘key-enablers’ that will help agriculture become more sustainable such as the inclusion of psycho-social understandings and actions. Michelle Young described the ANU’s Sustainable Farms initiative which helps farmers build natural assets including biodiversity on their farms. Gavin Mudd reviewed the essentials of mining and sustainability in the context of a world wanting radical change. Sally Hunter from Lock the Gate and a farmer from Narrabri NSW, described what it is like when mining industries come to your district, and of the ramifications these industries have on agriculture. Tony Hill told how Land to Market Australia is taking information about the ecological health of our farmland into a place where businesses and consumers can support regeneration. Robyn Alders said circular food systems, where resources are recycled and thus in continual use, can promote local sustainable production as well as fair global trade in food. Julian Cribb signalled an epic shift in food production in light of critical scarcities of water, soil, nutrients, fish and climate stability. 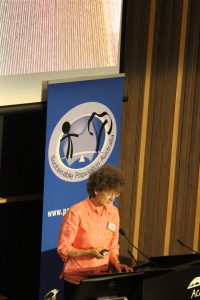 In the final session, Nicole Chalmer said food security is dependent on cultural changes, including our learning from Aboriginal eco-agricultural food systems which lasted for thousands of years until they collapsed with the arrival of Europeans. Will Steffen provided an overview of the enormous changes over the last 70 years that have driven the global commons out of the Holocene into the Anthropocene, and described how planetary boundaries can assess the magnitude and rate of human-driven changes. Jane O’Sullivan said current production systems can only support 3-4 billion people without transgressing planetary boundaries, so heroic transformations in production and consumption patterns will be needed if we are to feed 10 billion or more people.

In his outstanding summing up, Ian Lowe said: 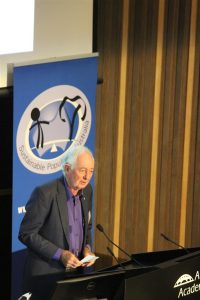 Below are just a sample of some of our favourite photos taken during the two days. 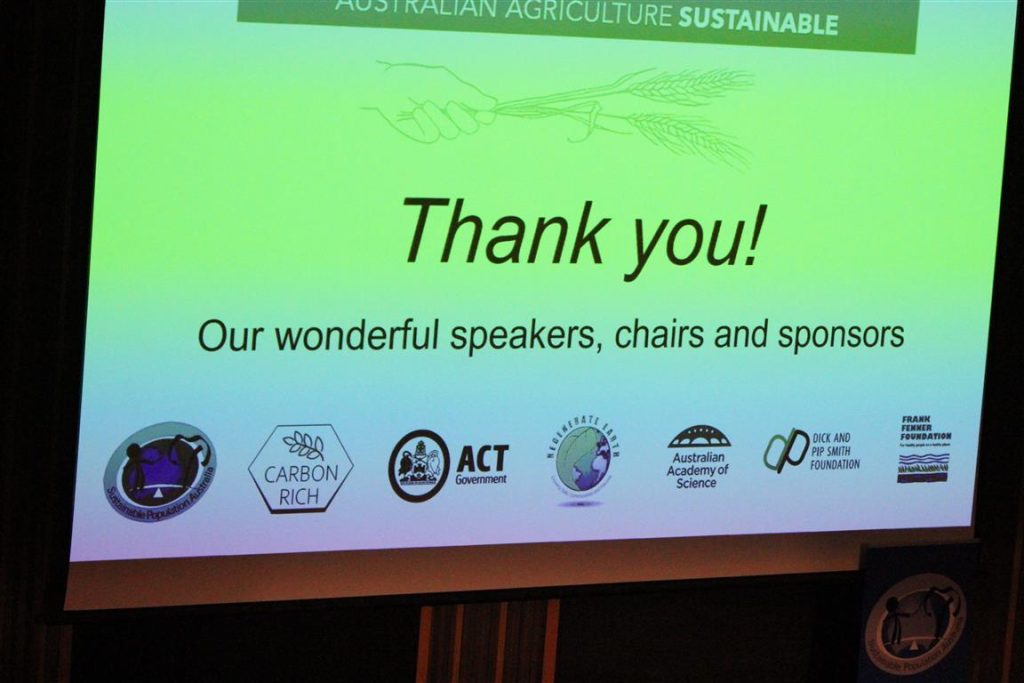 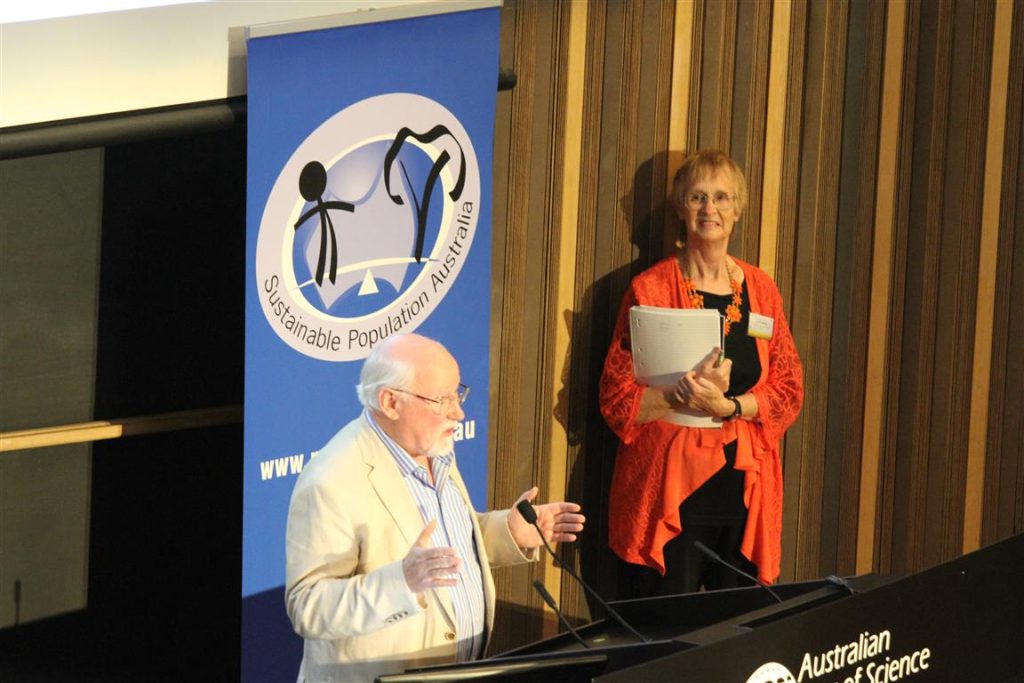 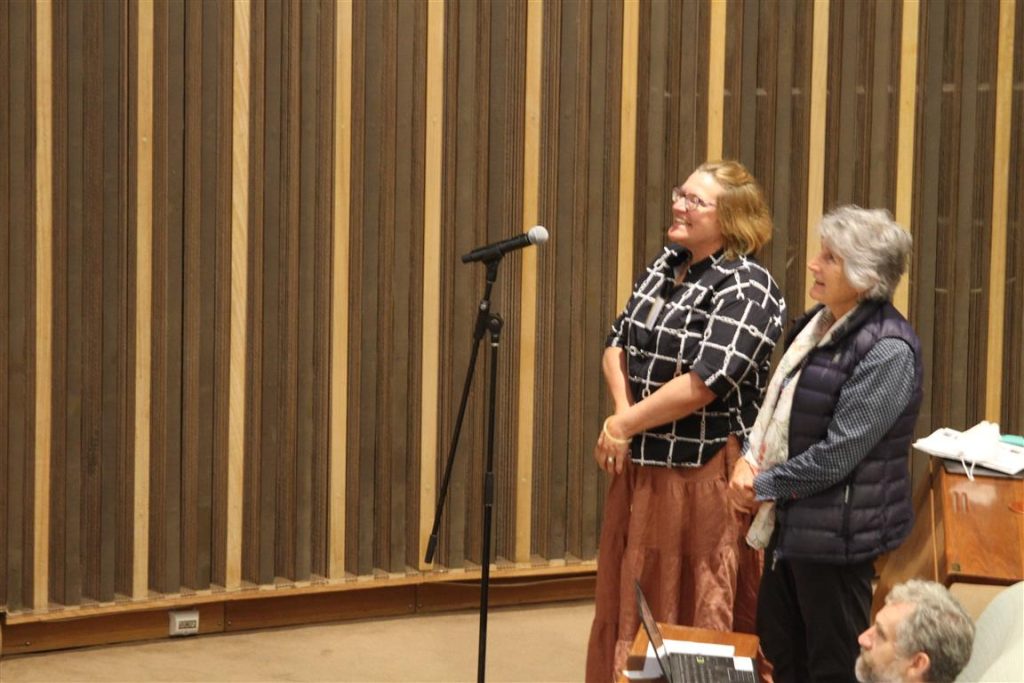 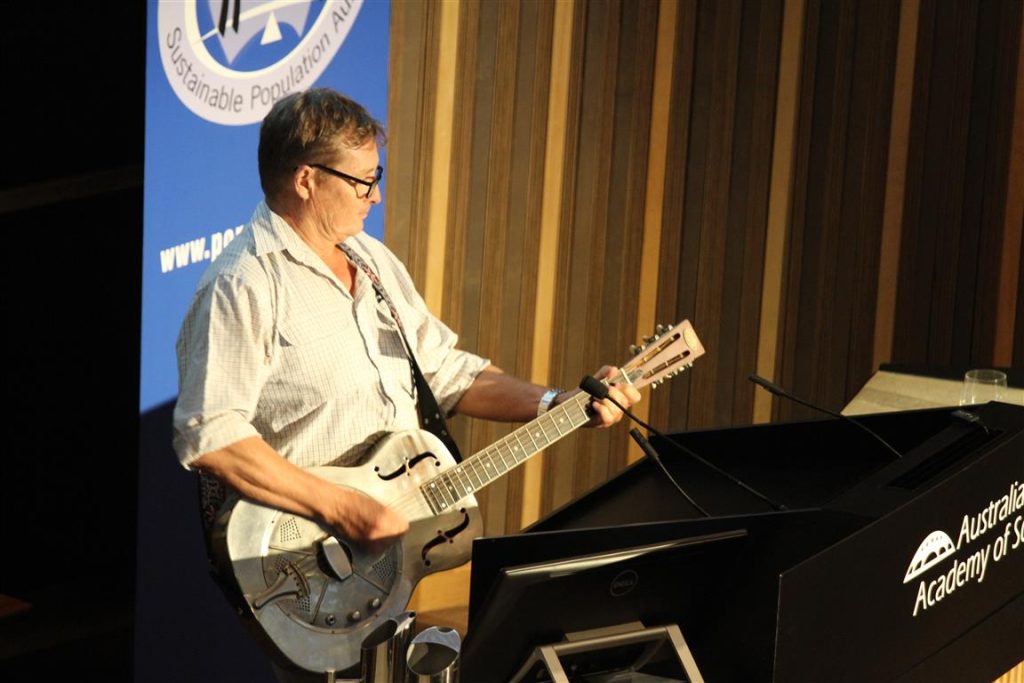 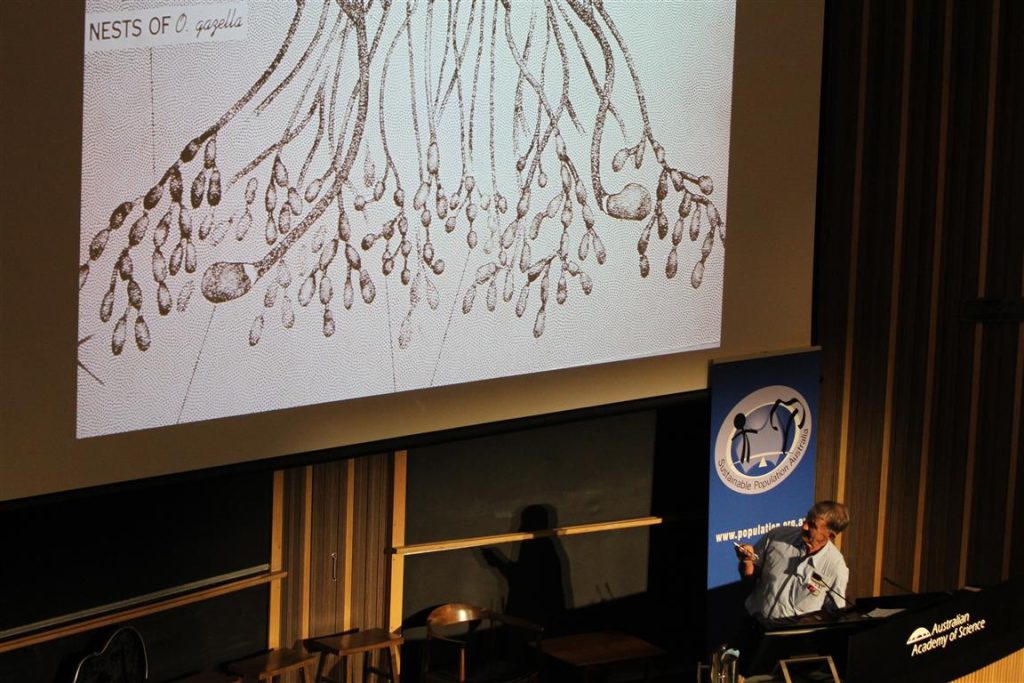 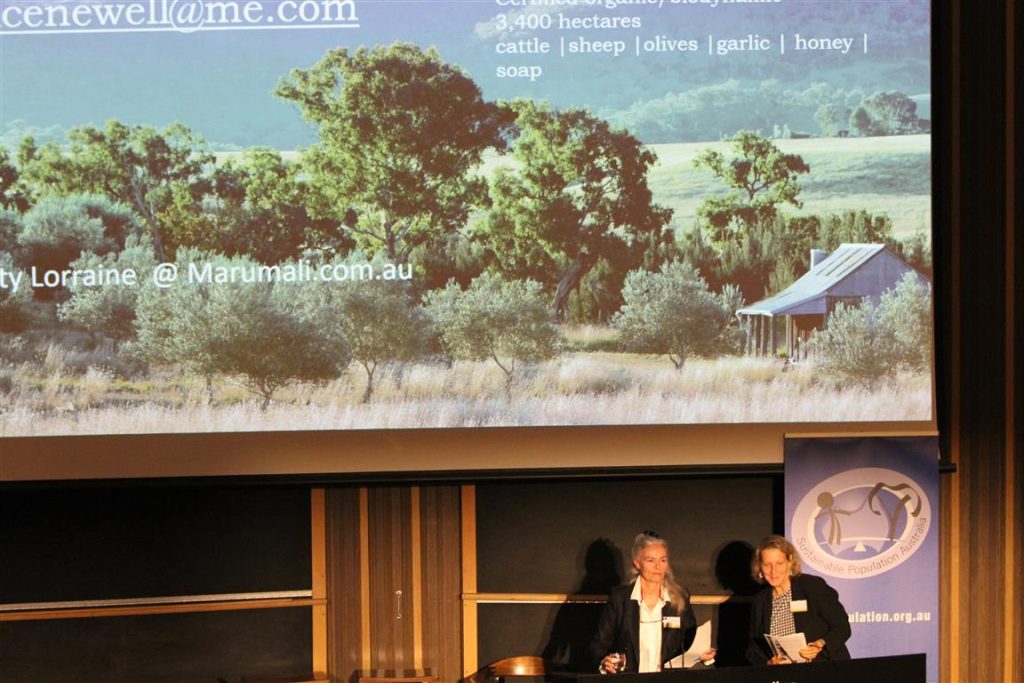