Sustainable Population Australia has enjoyed a very successful recent run in the media. 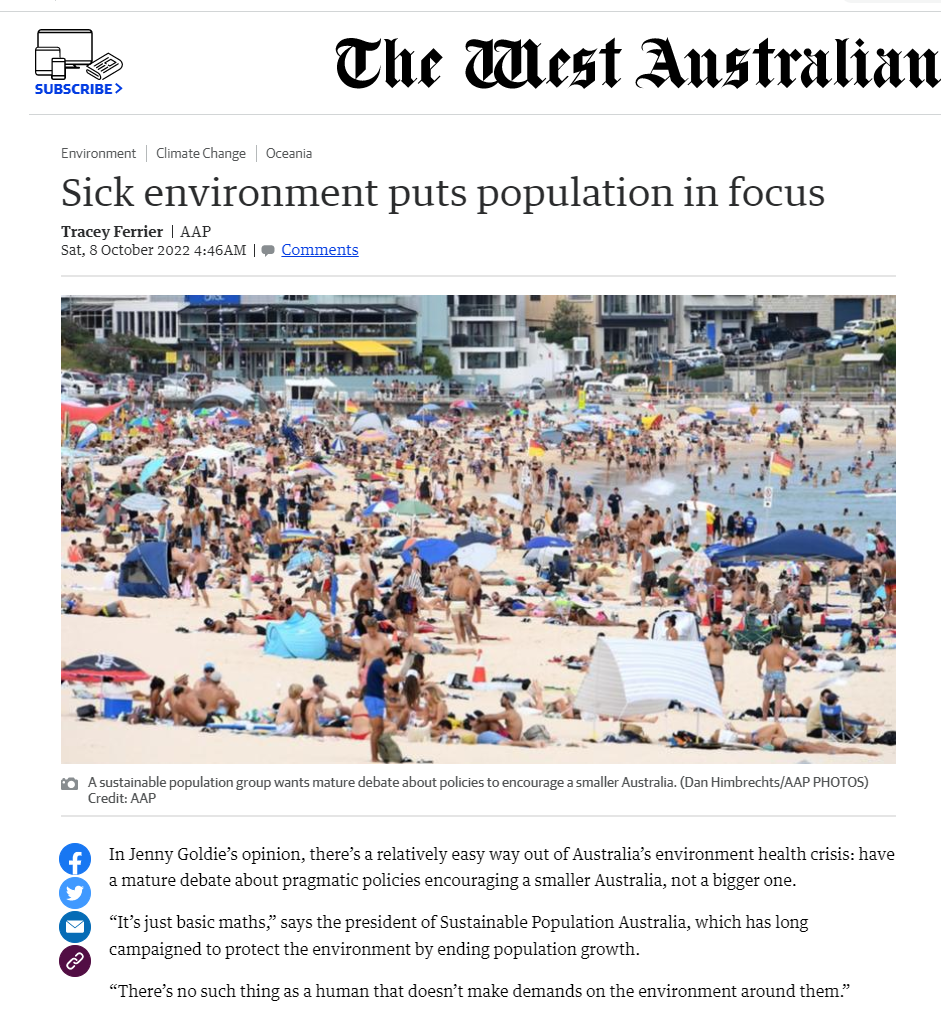 The Australian Associated Press (AAP) interviewed two members of our executive committee, Jenny Goldie (national president) and Dr. Jane O’Sullivan.   The resulting article, “Sick environment puts population in focus” was published on Saturday the 08th of October across nearly 70 metro, regional and community papers.  These include ‘The West Australian’, ‘The Courier’, ‘Perth Now’ and ‘The Daily Advertiser’ among many others.

The article can be read in full here.

(Screenshot of article  from ‘The West Australian’).

We believe that this is a most thoughtful piece of journalism.  It is not only very supportive of our position but also draws together some of the core statements we have made across several of our recent media releases.  This includes our response to the  State of the Environment Report 2021.

Also interviewed was Clifford Hayes, Victorian State MP for Sustainable Australia Party.   The closest this article came to an oppositional view was from former CSIRO research director Ian Cresswell.  His position is arguably more moderate than what is typical of our opposition.  However, there was an inference at one point that population advocacy groups believe the issue is only about numbers.  Of course we recognise lifestyles are also a factor and it is important we make this clear, as this is an assumption that many people use as a base to dismiss or discredit our arguments.

We would like to extend our congratulations to our members who had letters published in the media.  One member,  Peter Green,  had an excellent letter,  “End this lust for population growth”,  published in the Sydney Morning Herald on October 11th.   Mark Allen was  interviewed by 3CR’s  City Limits Program to discuss population and town planning concerns on October 12th.  His interview begins at the 34 minute mark of the episode. 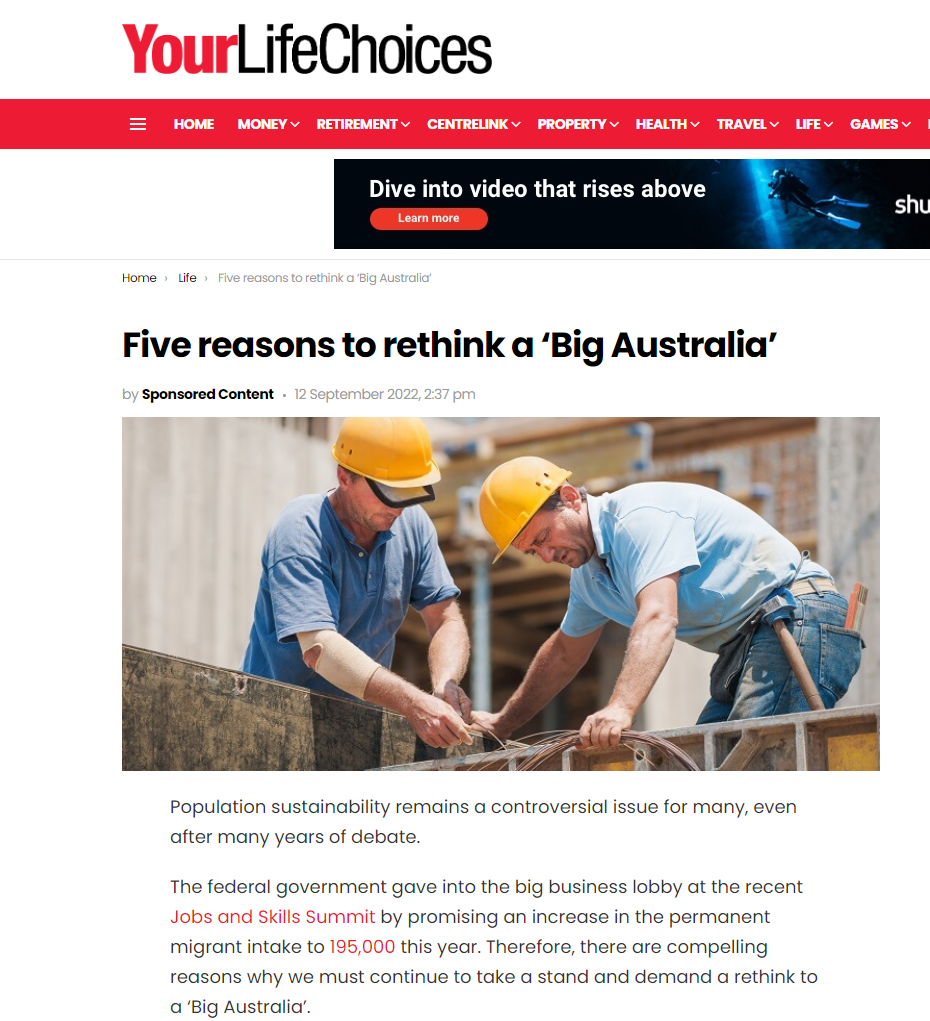 Further traction for SPA  involved our second collaboration with YourLifeChoices journal.  Between July and September of this year, YLC published four articles written by SPA.  These were timed around key calendar dates and events, such as Earth Overshoot Day, World Population Day and the Jobs and Skills Summit.

The results were very impressive.  Combined, our four articles – authored by Michael Bayliss (Communications Manager)  and Edward Smith  (Membership and Marketing Chair) –  reached the YLC readership 700, 000 times, were read 435 000 times and with 1450 further actions (including visits to the SPA website).

In addition to the articles, we also launched a survey questionnaire to the YLC readership on the housing sector. As well, Michael Bayliss was  invited as a guest on an episode of the YLC podcast. The results of this interview were similarly impressive, achieving 219 000 listens.  Links to the published articles can be found at the bottom of this post.

We believe these outcomes result from a culmination of all the work SPA has put into our multiple media releases and investing in our media distribution platform over the past couple of years.  During a time in which the Albanese Labor Government has committed to increasing the number of permanent migration visas available in 2022-23 from 160,000 to 195,000 places, it is important that our critical message continues to ring loud and clear in the public consciousness.

Our advocacy is pitted against the ‘Big Australia’ agenda of an extremely well-resourced business lobby who continue to dominate the press.  As such, community support is essential for our work to continue to make an impact.  Please consider sharing these articles and our media releases among your networks.  You may also wish to consider supporting SPA even further,  through signing up as a member or by making a donation.