The Steady Stater Podcast  is hosted by Brian Czech,  founder of the Centre for the Advancement of the Steady State Economy (CASSE).

CASSE is well known to Sustainable Population Australia (SPA),  with many of SPA’s membership who are also supporters of CASSE.  CASSE shares with SPA concerns regarding overpopulation and a vision for a post-growth future.   Several CASSE chapter leaders in Australia are existing or past SPA members. 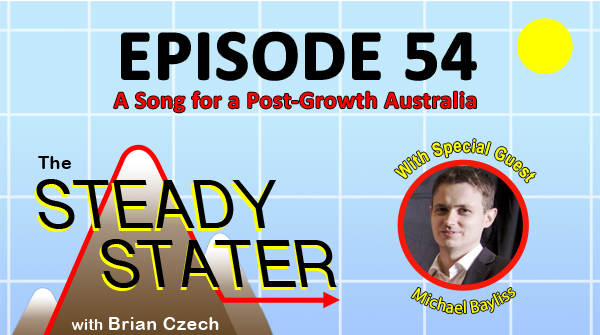 Our communications manager,  Michael Bayliss,  was invited to be interviewed on the Steady Stater podcast,  titled:  “A Song for a Post-Growth Australia.”  Many topics were discussed succinctly at just over half an hour.  These included the Post-Growth Australia Podcast (that Michael hosts),  Michael’s musical projects that cover environment themes and,  of course,  overpopulation.