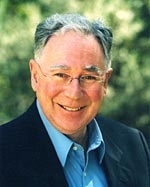 “One of the things that has concerned me for most of my life is the loss of the natural world.  My realisation about population came later.  I visited China, I lived in the United States for a number of years, and it was then that I began to see it was the expansion of the number of human beings that was causing the destruction everywhere you went. I gradually started to see the complexity of the population problem, and it is a profoundly complex problem and very difficult to deal with.  But the simple reality is that we can’t go on like this.”  (Quote from video interview with SPA, link here.)>

Dr Paul Collins is one of Australia’s best-known independent commentators on Catholic, religious and spiritual affairs especially in relationship to public life.  He is a respected commentator in the area of ethics, environmentalism, population and nature.  Paul describes himself as “an odd bod in the population movement … I come very strongly from the Catholic tradition and we of course have a very bad reputation in that area.”

Paul professed as religious in 1960 and ordained as a Catholic priest in 1967.  His priesthood included parish appointments in Hobart and Sydney, post-graduate studies at Harvard University (Masters in Theology) and the Australian National University (Ph.D in History), an academic appointment in the United States, and almost a decade with the ABC including three as Specialist Editor Religion.  In early 2001, after 33 years of service, Paul resigned from the active priestly ministry due to a doctrinal dispute with the Vatican’s Congregation for the Doctrine of the Faith over his 1997 book Papal Power: “The reason is simple: I can no longer conscientiously subscribe to the policies and theological emphases coming from the Vatican and other official church sources.”

• Publishing fifteen non-fiction books: three focus on the relationship of Australian Catholicism to social and national affairs,  five concentrate on the broader world church and the history of the papacy and the Vatican, and two examine the relationship between theology and ecology in the contemporary world, as well as five others on various topics, e.g. history of bushfire in Australia and Europe in the tenth century.

• His 2018 Absolute Power: How the Pope Became the Most Influential Man in the World traces the evolution of the papacy from 1799 to the present and argues that in the past two centuries “the papacy has become supreme in Catholicism and papal power increased enormously.”

• Regular contributor to most of Australia’s leading newspapers and magazines, as well as for the London Tablet, The National Catholic Reporter in the United States and for several magazines in Germany and Austria.

• Sought after commentator on Catholic affairs, the papacy, the Vatican, as well as environmental and population issues both nationally (ABC, SBS, commercial radio and TV) and internationally (the BBC, PBS – USA, NHK Japan, and Danish and New Zealand TV.

Paul continues to work as an independent scholar and writer.  He is deeply committed to ecological and population issues and participates in various organisations that work to renew the Catholic Church in the spirit of the Second Vatican Council.
Further details of Paul’s life, writings and work, plus his blog, are at:

Paul participated in a video interview with SPA for our ‘meet the patrons’  series.  A link to Paul’s interview can be found at our YouTube channel here